Carl Clemens Moritz Rungius's work could be available for sale at public auction with prices in the range of C$5,000 - C$500,000, or even much higher. 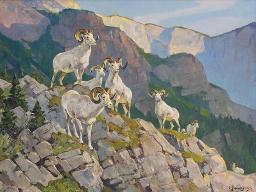 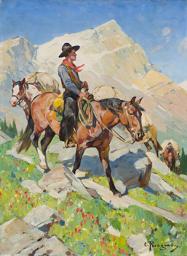 Carl Rungius was born in Rixdorf, Germany, and trained at the Academy of Arts in Berlin. He immigrated to the United States in 1896, and he painted in the western United States and Canada. Rungius had a passion for nature and was an avid hunter, and through his depictions of game in their mountain settings he became a renowned wildlife and landscape painter. In the early 1900s, the concept of wildlife conservation through habitat protection was championed by Rungius’s generation of sportsmen, and this movement crossed the boundary between Canada and the United States. Rungius first saw the Canadian Rocky Mountains on a railway trip in 1910 and was impressed by their grandeur. He returned often, building a studio-home in Banff called The Paintbox, and remained a part-time resident there until 1957. He exhibited in the Banff Springs Hotel and sold to its wealthy clientele. To access the wilderness, Rungius traveled with pack trains, executing on-the-spot sketches and taking photographs to serve as source material for his studio paintings. In Pack Horses Returning, Rungius expertly captures the clear mountain light, the fresh breeze ruffling the manes and tails of the horses picking their way through the steep terrain, and the magnificence of the alpine setting.

(*) Value is calculated as an average of the top art sale records from ArtValue.ca database.
This information is not intended to substitute professional advice.
To estimate the value of a specific artwork created by Carl Clemens Moritz Rungius, follow some of the advice from our Valuating art page, or contact an art specialist if our automated estimate value is greater than C$2,500.