American (1921 - 2007)
Calvin Burnett was an American painter.
From ArtValue.ca records, the highest price paid at auction for an acrylic painting work attributed to Calvin Burnett (1921-2007) was C$330 - paid for "Untitled - Couple" at Saskatchewan NAC in Regina on Sat, Feb 20, 2021.
ArtValue.ca has one auction art sale record for their acrylic painting results, with prices in the range of C$250 to C$500. 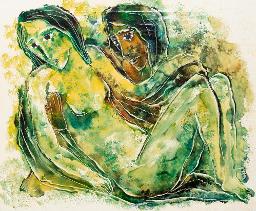 Calvin Burnett (1921-2007) was a graphic artist, illustrator, painter, designer and educator born in Cambridge, Massachusetts. He graduated from the Massachusetts School of Art in 1942 and received a Master's of Fine Art from Boston University in 1960. He taught at the Massachusetts School of Art for 33 years, retiring in 1985. His work is held in many private and public collection, including the Smithsonian Institution, the Museum of Fine Art and the Museum of African American History. He also founded the Association of Black American Artists and was listed in both "Who's Who in American Art" and "Who's Who in Education".

We do not have enough information to calculate an estimated Artist Value for Calvin Burnett.
To estimate the value of a specific artwork created by Calvin Burnett, follow some of the advice from our Valuating art page.