Brian Kipping's work could be available for sale at public auction with prices in the range of C$500 - C$25,000, or even much higher. 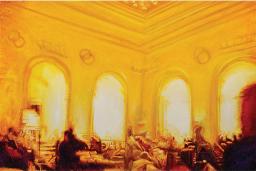 An artist of cityscapes, Brian Kipping painted many urban scenes around the world with a particular emphasis on the night light and imagery of his hometown, Toronto. His 2006 exhibition my streets (city) celebrated Toronto's greasy spoon restaurants and the golden glow of neon-illuminated evenings, and was seen across Canada and in New York City. Kipping's love of the night reflected his second career as a bass musician in the Paul James Band, with which he played with notables including Bob Dylan and Chuck Berry. His paintings also celebrated well-known urban landmarks such as Toronto's Union Station and New York City's Fifth Avenue Clock. In 1987-78, he and artist John McKinnon won a competition for and completed a public project at Toronto's City Hall; Views of the City is a huge installation of the city skyline in mosaics and copper covering two large walls. Over the course of his too-short career, Kipping's paintings were shown in about 150 group and solo exhibitions across Canada and overseas. Kipping succumbed to cancer in 2007, aged 53.

(*) Value is calculated as an average of the top oil painting sale records from ArtValue.ca database.
This information is not intended to substitute professional advice.
To estimate the value of a specific artwork created by Brian Kipping, follow some of the advice from our Valuating art page, or contact an art specialist if our automated estimate value is greater than C$2,500.