Canadian (1980)
Bracken Hanuse Corlett is a Canadian painter.
From ArtValue.ca records, the highest price paid at auction for an acrylic painting work attributed to Bracken Hanuse Corlett (1980) was C$1,375 - paid for "The Secret Map to the Huckleberry Patch" at Heffel in Vancouver on Tue, Aug 24, 2021.
ArtValue.ca has one auction art sale record for their acrylic painting results, with prices in the range of C$1,000 to C$2,500. 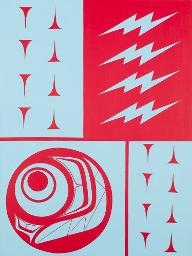 Bracken Hanuse Corlett is an interdisciplinary artist hailing from the Wuikinuxv and Klahoose Nations. He began working in theatre and performance 22 years ago and eventually transitioned towards his current practice that fuses sculpture, painting & drawing with digital-media, audio-visual performance, animation and narrative. Some of his notable exhibitions, performances and screenings have been at Grunt Gallery, Vancouver Art Gallery, Institute of Modern Art, Three Walls Gallery, Ottawa International Animation Festival Vancouver International Film Festival and Toronto International Film Festival. In 2019, Corlett created a projection mapping work for Façade Festival in partnership with Burrard Arts Foundation which was presented at the Vancouver Art gallery on September 11 along with Josh Hite and Justine Chambers.