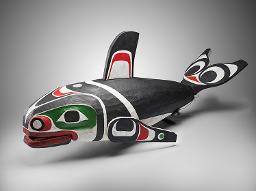 Kwakwaka’wakw (Musgamakw Dzawada’enuxw First Nation) artist and activist Chief Beau Dick or Walas Gwa’yam, was acclaimed as one of the Northwest Coast’s most versatile and talented carvers. He was born in the community of Alert Bay, British Columbia in 1955, and lived in Kingcome Inlet, Vancouver and Victoria before returning to Alert Bay to live and work. He began carving at an early age, studying under his father Benjamin Dick, his grandfather James Dick, and other renowned artists such as Henry Hunt and Doug Cranmer. He also worked alongside master carvers Robert Davidson, Tony Hunt and Bill Reid. His work has been shown in exhibitions around the world, including the 17th Biennale of Sydney, Australia (2010), documenta 14 (2017) and White Columns, New York (2019). He was the recipient of the Jack and Doris Shadbolt Foundation’s VIVA Award (2012) and was artist-in-residence at the University of British Columbia’s Department of Art History, Visual Art and Theory from 2013 to 2017. He died in 2017. For Dick, masks embodied a powerful connection to culture, knowledge and spirituality spanning across time - as he explains, “This art form is ceremonial art. It comes from ancient times and ancient experiences. It’s given to us as a gift from the creator.” This striking mask represents Killer Whale, an important crest figure on the Northwest Coast. Often featured in shamanic story and crest art, killer whales are an important symbol of family and longevity and are widely recognized as clan ancestors. They are also believed to be the reincarnations of past chiefs; when a chief dies, Killer Whale comes to shore to take their spirit. A prototype for the killer whale in Undersea Kingdom, presented at documenta 14, this mask was danced at carver Alan Hunt’s potlatch in Fort Rupert, British Columbia, in 2016. Please note: Consignor Hammer Price proceeds of this lot will benefit the Vancouver Art Gallery. The Buyer is hereby advised to read fully the Terms and Conditions of Business and Catalogue Terms, including the Vancouver Art Gallery Art Auction 2021 | Spring Forward HO2 Sale Notice and Special Terms of Sale, and any Addendum or Erratum specific to the Vancouver Art Gallery Art Auction 2021 | Spring Forward HO2 auction.

(*) Value is calculated as an average of the top sculpture sale records from ArtValue.ca database.
This information is not intended to substitute professional advice.
To estimate the value of a specific artwork created by Beau Dick, follow some of the advice from our Valuating art page, or contact an art specialist if our automated estimate value is greater than C$2,500.