Barnabus Arnasungaaq's work could be available for sale at public auction with prices in the range of C$5,000 - C$25,000, or even much higher. 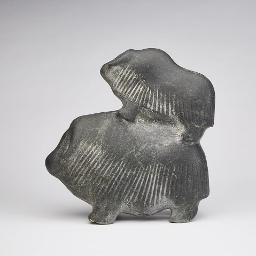 Recognized as one of the most well known Inuit artists, Barnabus Arnasungaaq was among the original carvers of the region. In the late 1950's, the government began to initiate carving programs to foster economic growth, which Barnabus eagerly took part in. The hard steatite was among the only stone available in the region, proving difficult to work with. However, Barnabus used it to his advantage by allowing it to emphasize what he meant to express. Barnabus' sculptures are timeless, often exhibiting brutish strength, placing emphasis on shape and monumentality. A Barnabus musk-ox is recognized globally.

(*) Value is calculated as an average of the top stone sculpture sale records from ArtValue.ca database.
This information is not intended to substitute professional advice.
To estimate the value of a specific artwork created by Barnabus Arnasungaaq, follow some of the advice from our Valuating art page, or contact an art specialist if our automated estimate value is greater than C$2,500.