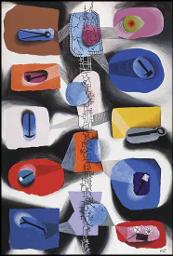 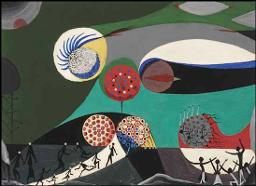 Alfred Pellan studied, lived and worked in Paris beginning in 1926. On his return to Canada in 1940 after the German invasion of Paris, he was hailed as a hero who would aid in ending conservatism and academism in Quebec. Artist Jacques de Tonnancour claimed, "What French-Canadian art needed in order to be resurrected after these centuries of lethargic slumber was a vigorous blow from the outside and Pellan provided that blow." In 1948, Pellan founded the Prisme d'yeux group to encourage diversity and counter the dominant influence of the Automatists. Pellan's work was informed by various European influences such as Paul Klee, Pablo Picasso, Primitivism and, most significantly, Surrealism. Soucoupes volantes, or Flying Saucers, embodies Pellan's unique use of associative dream imagery. Groups of people express amazement at these strange craft in the skies, depicted by ovals and round forms activated by an inner energy force. Typical of Pellan is the flamboyant use of colour and the depiction of the transformative space of the unconscious. Inventive and fantastic, Soucoupes volantes contains a dimension of interaction and transformation between human experience and the unknown.

(*) Value is calculated as an average of the top mixed media sale records from ArtValue.ca database.
This information is not intended to substitute professional advice.
To estimate the value of a specific artwork created by Alfred Pellan, follow some of the advice from our Valuating art page, or contact an art specialist if our automated estimate value is greater than C$2,500.