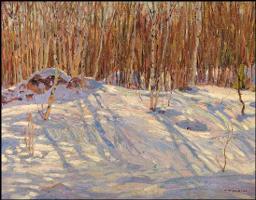 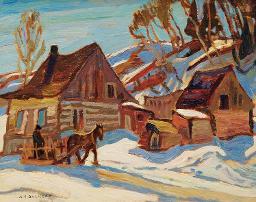 Born in Montreal, Alexander Young Jackson left school at the age of twelve and began work at a Montreal printing firm. In 1906, he undertook art studies at the Art Institute in Chicago. The following year he enrolled at the Academie Julian in Paris and remained in France until 1912. During this period his painting was strongly influenced by the Impressionists. After his return to Canada, Jackson took up residence in Montreal and made many sketching trips to the surrounding countryside. Harris and MacDonald were impressed by Jackson's work and, in 1913, persuaded him to move to Toronto. Jackson's great sense of adventure carried him from the east coast across Canada to the Rocky Mountains of the west. He made regular sketching trips to Quebec every spring and travelled to the far regions of Canada during the summer, including the Canadian Arctic. In the fall he would return to the Studio Building in Toronto (where he lived until 1955), spending the winters painting canvases. He continued this active lifestyle until he was in his eighties.

(*) Value is calculated as an average of the top oil painting sale records from ArtValue.ca database.
This information is not intended to substitute professional advice.
To estimate the value of a specific artwork created by Alexander Young (A. Y.) Jackson, follow some of the advice from our Valuating art page, or contact an art specialist if our automated estimate value is greater than C$2,500.