Alex Cameron's work could be available for sale through Art Galleries or at public auction with prices in the range of C$1,000 - C$10,000, or even much higher.

From ArtValue.ca records, the highest price paid at auction for an oil painting work attributed to Alex Cameron (1947) was C$6,000 - paid for "Blue Orange Leaves" at Waddington's in Toronto on Tue, Mar 4, 2014.
ArtValue.ca has 21 auction art sale records for their oil painting results, with prices in the range of C$1,000 to C$10,000. 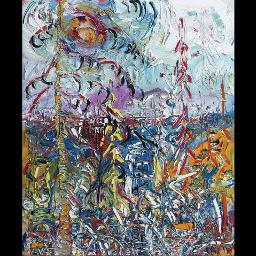 Artistically active since the early 1970s, Alex Cameron creates thickly painted works of oil on canvas, overflowing with colour and exuding joy. Exploring landscape and abstract idioms, Cameron works both large and small. Wall-sized paintings such as Red Pine Wild (2010) bring a Fauvist sensibility to familiar Canadian terrain, while small, page-sized abstractions such as Blue Dribble (2010) reference Indian miniatures and Cameron's travels. Extensively exhibited through four decades, Cameron's work was featured in Four Toronto Painters at the Ontario Art Gallery (1976), 14 Canadians at Washington's Hirschorn Museum (1977), and Alex Cameron in Mid-Career (1985), a traveling early retrospective organized by the Robert McLaughlin Gallery in Oshawa. Based in Toronto, Cameron has shown across Canada and in the U.S. and is extensively collected in private and public collections, such as those of the Art Gallery of Ontario, the Art Gallery of Hamilton, and the Office of the Prime Minister of Canada.

(*) Value is calculated as an average of the top oil painting sale records from ArtValue.ca database.
This information is not intended to substitute professional advice.
To estimate the value of a specific artwork created by Alex Cameron, follow some of the advice from our Valuating art page, or contact an art specialist if our automated estimate value is greater than C$2,500.