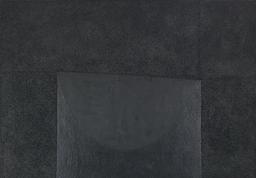 Italian artist Alberto Burri is known for his experimental abstract paintings in which he pioneered the use of unorthodox materials and techniques, radically re-negotiating painting as a medium. Burri began painting through a YMCA prisoner of war program after being captured by the Americans while serving in the Italian army as a medic during the Second World War. Upon his return to Italy in 1946, Burri started experimenting with alternative painting materials such as tar, sand, zinc, pumice and polyvinyl chloride glue. He also began to physically manipulate the depth of his paintings, creating protrusions and bulges by adding pieces of wood to the back of his canvasses. His breakthrough came when Guggenheim director James Johnson Sweeney saw his Sacco pieces in which he tore and stitched symbolically charged Jute sacks on the face of his paintings. Through this connection, Burri was introduced to the American art scene, where he found favour among critics. Throughout his career he continued to further incorporate materials and processes such as fire and metal in his work, pushing forward the concept of a constructed work. His direct influence can be seen in Robert Rauschenberg’s Combine paintings and in the Arte Povera movement of the late 1960s and 1970s. In 2015 to 2016, Burri’s work was the subject of a major retrospective exhibition The Trauma of Painting at the Guggenheim Museum in New York.

We do not have enough information to calculate an estimated Artist Value for Alberto Burri.
To estimate the value of a specific artwork created by Alberto Burri, follow some of the advice from our Valuating art page.