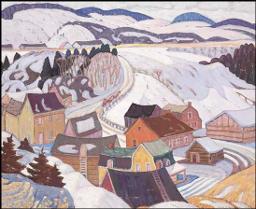 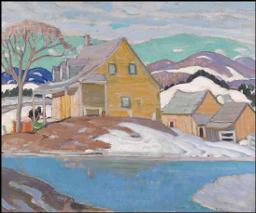 Albert Robinson's exposure to French Impressionism during his time studying and sketching in Paris from 1903 to 1906 was pivotal to his development and the evolution of his light-filled colour palette. Originally from Hamilton, Ontario, Robinson moved to Montreal in 1909, through the generous sponsorship of patrons Mr. and Mrs. William L. Davis, who purchased his work, guaranteed his studio rent and introduced him to leading painters and collectors. Initially, Robinson painted Montreal subjects and integrated into the Montreal scene; he joined the Pen and Pencil Club and was an annual contributor to the Art Association of Montreal shows. He befriended Group of Seven artist A.Y. Jackson, and in 1911 they traveled to Saint-Malo and Carhaix in France. Beginning in 1920 and into the early 1930s, he made almost yearly trips along the St. Lawrence River, and the body of work he produced painting the towns and rural countryside there was truly extraordinary. He was often in the company of Jackson, and also painted with Clarence Gagnon, Randolph Hewton and Edwin Holgate. Jackson told amusing anecdotes of their time together in his autobiography, A Painter's Country, and made it clear he learned a great deal about art from Robinson. Together, these comrades in arms painted out of doors in such colourful Quebec villages as Cacouna, La Malbaie, St-Tite-des-Caps, Baie-Saint-Paul and Les Éboulements.

(*) Value is calculated as an average of the top oil painting sale records from ArtValue.ca database.
This information is not intended to substitute professional advice.
To estimate the value of a specific artwork created by Albert Henry Robinson, follow some of the advice from our Valuating art page, or contact an art specialist if our automated estimate value is greater than C$2,500.