Adeline Rockett's work could be available for sale through Art Galleries or at public auction with prices in the range of C$250 - C$2,500, or even much higher. 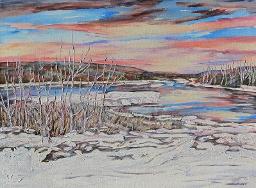 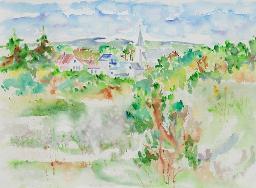 Adeline Rockett was born in Blaine Lake, Saskatchewan in 1929. She studied at the University of Saskatchewan in Saskatoon, receiving a Bachelor of Arts in 1962 and a Bachelor of Education in 1969. During this time, she worked as an instructor and researcher at the university. Rockett then moved on to Edmonton, Alberta, where she worked as a faculty consultant in the University of Alberta's Faculty of Education (1971-1973), attended the Banff School of Arts, and completed a Master in Art Education from the University of Alberta (1974). Her art studies would also take her to Europe, where she visited major galleries in London, Paris, Madrid, and Barcelona. In the 1980s, Rockett also spent time in the United States, completing gallery studies in New York City and at the Smithsonian Institute in Washington, D.C. Focusing on landscape and attending to light, land, water, and the changing seasons, Rockett has traveled across Canada to paint a variety of scenes in watercolour and acrylics. In the early 1990s, she painted a series of works depicting the Arctic after a visit there. Since the early 1970s, Rockett's paintings have been exhibited in group and solo shows across Canada, especially in Saskatchewan and Alberta. Her watercolours were part of an exhibition entitled 'Canada in International Waters', which toured Canada, the United States, and the United Kingdom from 1991 to 1993. Rockett's work is represented in over 70 collections, including the Alberta Art Foundation, Athabasca University, Mendel Art Gallery (Saskatoon), University of Alberta, Government of Alberta, Edmonton Public School Board, Royal Collection of Drawings and Watercolours at Windsor Castle (England), Husky Oil Operations Ltd., Toronto-Dominion, Gulf Canada Resources, National Trust, and Bank of Montreal.âÀ¨âÀ¨Rockett has been involved with the Canadian Society of Painters in Watercolour and the Alberta Society of Artists, of which she was Chairperson from 1977 to 1979. In 2000, Rockett won the Millennium Art Competition through the Conservation Council of Canada and the Canada Millennium Partnership Program; her painting hangs in Ottawa at the Conservation Hall of Fame. Adeline Rockett continues to live and work in Edmonton, Alberta.

(*) Value is calculated as an average of the top acrylic painting sale records from ArtValue.ca database.
This information is not intended to substitute professional advice.
To estimate the value of a specific artwork created by Adeline Rockett, follow some of the advice from our Valuating art page, or contact an art specialist if our automated estimate value is greater than C$2,500.