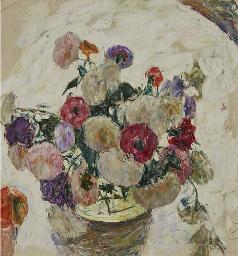 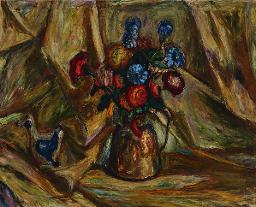 Peter Falk cites Abraham Manievich's birth date as 1881. Born in Mstislavl, Mogilev, Russia, he emigrated to the US in 1922. Manievich, painted in a bold Fauvist style. His Russian period works date from 1902 to 1921. After settling in the Bronx in New York, he travelled extensively, walking many miles and painting regional scenes in industrial Pittsburgh, Pennsylvania, villages along the Hudson River and in Connecticut, and winter scenes in Canada. Dr. Stern befriended Manievich during his visits to Montreal, Quebec and acquired this double-sided canvas depicting a lyrical still life of flowers with brilliant colouring on the front and a landscape verso. In the US, Manievich exhibited both his Russian and American landscapes. This large canvas remained in Dr. Stern's family ever since their acquisition directly from the artist prior to the 1950s.

We do not have enough information to calculate an estimated Artist Value for Abraham Manievich.
To estimate the value of a specific artwork created by Abraham Manievich, follow some of the advice from our Valuating art page.