Abraham Etungat's work could be available for sale at public auction with prices in the range of C$2,500 - C$10,000, or even much higher. 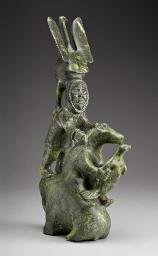 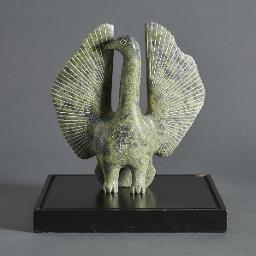 "Abraham Etungat was born at Tasiujajuak in the Amadjuak area of South Baffin Island in the year 1911. His first visit to Cape Dorset was at the age of ten on a trading trip with his family. He had lived all of his early life in camp in a manner similar to those who derived their living from the land. Etungat has always been an independent soul, outspoken and capable as both a hunter and sculptor. He settled in Cape Dorset in the early 1960s having lived just prior to that north of Cape Dorset and the Hantzsch River in Foxe Basin. His first carvings were small and compact and often then as now depicted birds. His present style of carving has developed over these past few years resulting in the bird with raised wings being often copied by fellow artists. The Devonian Foundation of Calgary commissioned him to provide a maquette from which they created a heroic-sized bird image that was cast in bronze and is located in Toronto at the Ryerson Parkette (Yonge & Dundas). Etungat is today a man little involved in hunting given his health and age. He is a carver who is generally engaged in creating works of considerable power. He takes pride in his creations and will not bring a piece of sculpture to the co-operative that does not meet his standards of quality and creativity." Terrence P. Ryan, ABRAHAM ETUNGAT Sculpture, Images Art Gallery, 3429 Yonge St., Toronto 1981

(*) Value is calculated as an average of the top stone sculpture sale records from ArtValue.ca database.
This information is not intended to substitute professional advice.
To estimate the value of a specific artwork created by Abraham Etungat, follow some of the advice from our Valuating art page, or contact an art specialist if our automated estimate value is greater than C$2,500.