(1914)
Aart Kemink is a painter.
From ArtValue.ca records, the highest price paid at auction for a watercolour work attributed to Aart Kemink (1914) was C$ - paid for "Amsterdam, 1953" at Waddington's in Toronto on Thu, Oct 15, 2020.
ArtValue.ca has one auction art sale record for their watercolour results, with prices in the range of C$100 to C$250. 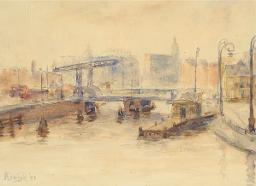 Aart Kemink emigrated to Canada in 1958. In the late 1940s and the early 1950s, Kemink became a member of the Beroepsvereniging van Beeldende Kunstenaars (known as the BBK or Union of Visual Artists). During his time in the Netherlands, Kemink also worked with compatriot Cobra artist Karel Appel.

We do not have enough information to calculate an estimated Artist Value for Aart Kemink.
To estimate the value of a specific artwork created by Aart Kemink, follow some of the advice from our Valuating art page.