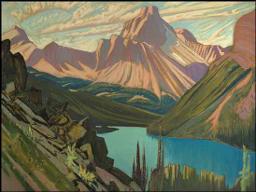 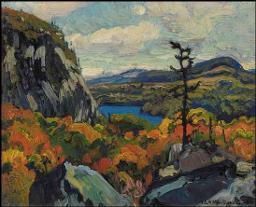 Early Autumn, Montreal River, Algoma is a delightful and joyous bouquet of colour. Related closely to several of J.E.H. MacDonald's masterworks such as October Shower Gleam and The Solemn Land, this work comes from the second boxcar trip arranged by Lawren Harris into Algoma country. Harris, after his discharge from the army in 1918, had traveled to Manitoulin Island with James MacCallum on a respite to aid in his recovery. Not finding the scenery to his liking, Harris suggested a side trip on the Algoma Central Railway to find more appealing views. It was on this side trip that he first encountered Algoma and the inspiration for the boxcar trips came. Harris organized the first boxcar excursion in the fall of that year and included Frank Johnston and MacDonald - whom he had to urge, as MacDonald was also recovering from recent illnesses. A third trip, the second of the boxcar expeditions, saw the inclusion of A.Y. Jackson, who had just returned from France, and took place in September of 1919. Jackson describes the scenery as vivid with changing hues: "The colour is disappearing very fast. The reds were gorgeous when we first came, but now it is all orange and yellow." This striking work comes from that trip, and if we can take Jackson's writing literally, it comes from early in the trip, as the reds are indeed gorgeous.

(*) Value is calculated as an average of the top oil painting sale records from ArtValue.ca database.
This information is not intended to substitute professional advice.
To estimate the value of a specific artwork created by James Edward Hervey (J.E.H.) MacDonald, follow some of the advice from our Valuating art page, or contact an art specialist if our automated estimate value is greater than C$2,500.