Maurice Galbraith Cullen's work could be available for sale at public auction with prices in the range of C$50,000 - C$2,500,000, or even much higher. 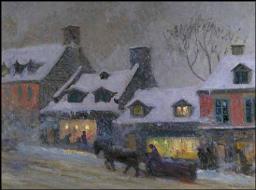 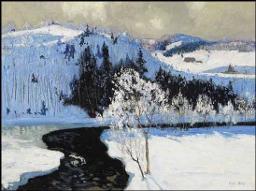 Maurice Cullen's initial interest in art was in the medium of sculpture. He apprenticed under Louis-Philippe Hébert at Monument National in Montreal, but after visiting Paris in 1888 he was so enthralled by the work of the Impressionists that he turned instead to painting. The techniques he learned as a sculptor, however, would be used throughout his career, as he was very particular about his materials, making his own paints and carving and gilding his own frames. He was, from the first, interested in painting snow, and while in the beginning the Canadian art-buying public had little interest in paintings of their long winters, he persisted, developing a dexterous prowess with the colours useful in winter scenes, such as white, blue, black and grey. Cullen exhibited as a guest in the first showing of the Canadian Art Club, a secessionist group that had formed out of the Ontario Society of Artists in 1907. Its aim was to support and exhibit art that depicted Canada, "something that shall be Canadian in spirit, something that shall be strong and vital and big, like our Northwest land." His work hung on the walls of the York County Court House in Toronto, a place that had served previously as a studio for Frederick Challener and would later become home to the Arts and Letters Club. Over time, Montrealers came to appreciate his depictions of everyday life and the realities of winter, and by 1912 his work was the subject of positive reviews such as an article by Newton MacTavish in Canadian Magazine. He realized some sales, but without the patronage of Sir William Van Horne of the Canadian Pacific Railway, he would have struggled to get by. His scenes of winter subjects such as harvesting ice, horse-drawn sleighs and villages in winter at night were often painted on-the-spot, and they attest to his ability to work outside in challenging conditions. His plein air method was eagerly embraced by the next generation of artists that included A.Y. Jackson (who would call Cullen a hero) and would be exemplified by the work of the Group of Seven. Cullen's desire for first-hand verity in his work was a credo of its methods and philosophically at the very core of the movement.

(*) Value is calculated as an average of the top oil painting sale records from ArtValue.ca database.
This information is not intended to substitute professional advice.
To estimate the value of a specific artwork created by Maurice Galbraith Cullen, follow some of the advice from our Valuating art page, or contact an art specialist if our automated estimate value is greater than C$2,500.