Kenojuak Ashevak's work could be available for sale at public auction with prices in the range of C$10,000 - C$250,000, or even much higher. 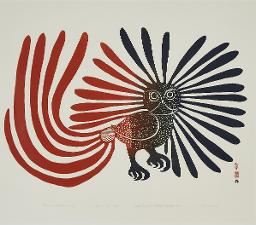 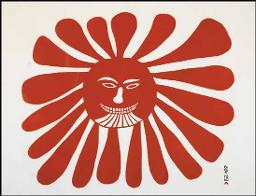 Kenojuak Ashevak was an important Inuit artist from Cape Dorset, Baffin Island, known for her drawings, carvings and prints. When James Houston introduced printmaking to the Inuit of Cape Dorset in the 1950s, Kenojuak used the knowledge she gained to produce her first print in 1958. By 1959, Kenojuak and other Cape Dorset Inuit artists had formed the West Baffin Eskimo Co-operative, and together, these printmakers set a high standard for technical excellence and artistic quality in printmaking. Kenojuak soon gained renown for her work, and in 1963 she was the subject of the National Film Board documentary Eskimo Artist: Kenojuak, which featured her working on her stonecut prints. Her images have been featured on stamps, and she was accorded many honours, such as the Companion of the Order of Canada. The Woman Who Lives in the Sun, with its vibrant presence, is an outstanding example of her work. Of the edition of 50, 25 were printed in red - the other 25 were printed in yellow. Both the National Gallery of Canada and the Canadian Museum of Civilization have an impression of this rare print in their collections.

(*) Value is calculated as an average of the top stonecut sale records from ArtValue.ca database.
This information is not intended to substitute professional advice.
To estimate the value of a specific artwork created by Kenojuak Ashevak, follow some of the advice from our Valuating art page, or contact an art specialist if our automated estimate value is greater than C$2,500.