Adam Sherriff Scott's work could be available for sale at public auction with prices in the range of C$1,000 - C$25,000, or even much higher. 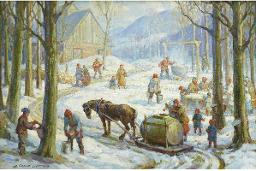 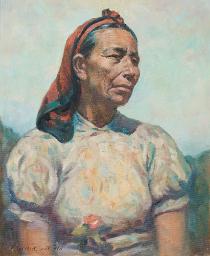 Adam Sherriff Scott was born in Perth, Scotland and began his art education in 1903 at the Edinburgh School of Art. He was awarded the Allen-Fraser Scholarship to continue his studies for four years at the Allen-Fraser institute, which was a finishing school for talented young artists, and studied under George Harcourt A.R.A. He was one of only ten artists who qualified for the scholarship. After this, he continued his studies at the Slade School under Henry Tonks as well as at the National Gallery and the Tate Gallery. In 1912, he moved to Brandon, Manitoba, followed shortly thereafter by Calgary, Alberta where he stayed for three years. He worked for an American who commissioned him to paint large scenes of the Canadian West to sell to real estate agents. Upon the advise of his patron, Scott moved to Montreal in 1915, where he remained for the rest of his life. He became a member of the Beaver Hall Hill Group, which included such artists as Lilias Torrance Newton, Randolph Hewton, Edwin Holgate and Robert Pilot. He served with the Canadian armed forces in WWI and returned in 1919 as an acting Captain. He was commissioned to paint numerous portraits, as well as posters for the Canadian Pacific Railway and the Southam Press. During the 1920s, he spent six years living with the Inuit and painted numerous scenes of their lives. He established the Adam Sherrif-Scott School of Fine Art, where he taught drawing and painting. He was elected ARCA in 1935 and a full member of the Royal Canadian Academy in 1944.

(*) Value is calculated as an average of the top oil painting sale records from ArtValue.ca database.
This information is not intended to substitute professional advice.
To estimate the value of a specific artwork created by Adam Sherriff Scott, follow some of the advice from our Valuating art page, or contact an art specialist if our automated estimate value is greater than C$2,500.