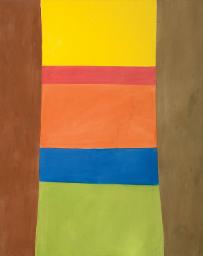 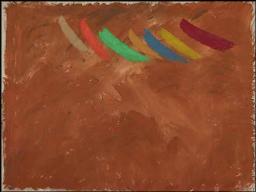 Jack Bush began his career as an illustrator and went on to produce first-rate commercial work for 40 years. He worked in the commercial art firm that had once employed Tom Thomson and five members of the Group of Seven, then known as Rapid Grip Ltd., an amalgamation of the Rapid Electrotype Company and the original Grip Ltd. Although Bush had been keenly interested in illustration since his youth and was an extremely talented illustrator, he aspired to be a fine art painter. While time constraints dictated that he could paint for his own purposes only in his time off, he was dedicated to this pursuit, practising life drawing regularly and devoting much of his time to further study. Once he had married and started a family, he began to feel overwhelmed with the conflicting pressure between his domestic responsibility and role as a wage earner and his desire to push his art further and strike out into the avant-garde. These conflicting priorities became increasingly stressful, so in 1947 Bush began seeing psychiatrist Dr. J. Allan Walters. Walters suggested that Bush use his painting time to create experimental works and to deal with his anxieties. He advised him to empty his inner feelings and moods completely into them, without preconceived ideas concerning the outcome - to paint out his stresses, and to just be himself. Bush did so, creating abstract works comprised of bold colours set on a solid ground. He would begin to show these works within the year and with considerable success. Additionally, on Dr. Walter's advice, Bush would begin to keep a diary to accompany the paintings. Bush's works, when viewed within the context of his diaries, are a play-by-play account of the successes and sorrows of his life.

(*) Value is calculated as an average of the top oil painting sale records from ArtValue.ca database.
This information is not intended to substitute professional advice.
To estimate the value of a specific artwork created by Jack Hamilton Bush, follow some of the advice from our Valuating art page, or contact an art specialist if our automated estimate value is greater than C$2,500.