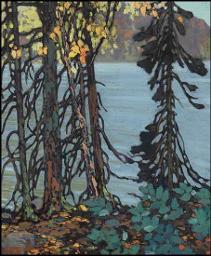 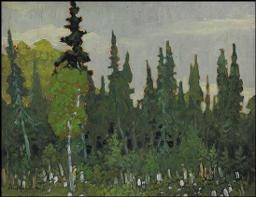 Algoma Tapestry is a rare early work that not only comes from the very first boxcar trip taken by Frank Johnston, Lawren Harris and J.E.H. MacDonald to Algoma, but also has a special provenance, having passed by descent through the family of Tom Thomson to auction with Heffel. This fine work, exemplary of Johnston's decorative and panoramic style, was painted in the fall of 1918 when the aforementioned artists, together with James MacCallum, went by train from Toronto to Sault Ste. Marie, and from there to Canyon, 113 miles north, where they spent a week painting the vivid and ever-changing autumn landscape. From Canyon they moved to Hubert on the Montreal River and then on to Batchawana, returning to Toronto in early October. Despite the poor weather and constant grey skies, Johnston was prolific, producing 33 plein air sketches. Upon his return to Toronto, he, Harris and MacDonald drew on this material to produce sufficient work to mount a show at The Art Gallery of Toronto (now the Art Gallery of Ontario) in April of 1919, a show that was considered a success. In their accompanying text, the artists called upon their audience to accept the works as "evidence that Canadian artists were interested in the discovery of their own country." Brief statements, later termed "Algomaxims", accompanied the works, such as "The great purpose of landscape art is to make us at home in our own country." Another stated, "The old masters were young servants once," and would have been directed at painters far senior to the fledgling members of the Group, but holds a telling irony for us looking back at their work now.

(*) Value is calculated as an average of the top oil painting sale records from ArtValue.ca database.
This information is not intended to substitute professional advice.
To estimate the value of a specific artwork created by Frank (Franz) Hans Johnston, follow some of the advice from our Valuating art page, or contact an art specialist if our automated estimate value is greater than C$2,500.