Christopher John Pratt's work could be available for sale at public auction with prices in the range of C$10,000 - C$500,000, or even much higher. 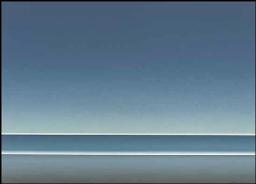 Christopher Pratt draws inspiration from his environment in Newfoundland - landscapes, architecture, interiors, figures and, as seen in Atlantic: North North-East, the coast. He infuses his geographical surroundings with his own personal accounts. Pratt is both a painter and an editor, selecting, adding and removing elements to craft a striking and personal reflection of reality. The infinite horizon is a familiar subject for Pratt, and has appeared throughout his work, such as in his serigraphs from the 1970s and 1980s of coastal horizons. Here, however, illustrative details such as waves or boats found in previous works are removed, resulting in a flattened and more abstracted composition. Only the barest essential elements - water, sky and light - are included, which makes the viewer question what other details were removed and, more importantly, why. The title clearly indicates the direction, but this infinite horizon could be anywhere. This is a universal scene that all viewers can identify with and thus is an excellent example from Pratt's fruitful career, notably created two years after his significant exhibition at the National Gallery of Canada.

(*) Value is calculated as an average of the top oil painting sale records from ArtValue.ca database.
This information is not intended to substitute professional advice.
To estimate the value of a specific artwork created by Christopher John Pratt, follow some of the advice from our Valuating art page, or contact an art specialist if our automated estimate value is greater than C$2,500.