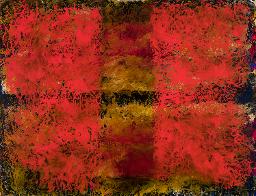 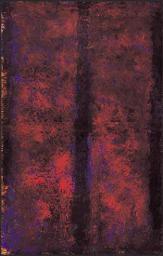 One becomes aware of the originality of Jean McEwen's painting - and Verticale nocturne is a splendid example of his production from the early sixties - when we attempt to associate it with one of the two main currents of the time: the post-Automatist painting of Rita Letendre, Lise Gervais and Jean Lefébure, or the Plasticiens' aesthetic of rigorous geometry and thin layers of paint. On the one hand, McEwen was a master of the colour field and did not maintain the opposition of objects against a receding background. As art historian and author Constance Naubert-Riser has pointed out, McEwen maintains depth in his painting only through colour. In that sense he is closer to Sam Francis, whom he met in Paris, or to Mark Rothko, Barnett Newman or Clyfford Still than to the followers of Paul-Émile Borduas. On the other hand, even though he often adopted the vertical format, like the idea of "the zip", as in Newman's painting of a vertical passage between two masses, McEwen rejected the hard-edge presentation of the Plasticiens. There was no need of masking tape to get neat lines between the colours, as in Guido Molinari's or Claude Tousignant's painting. Not only did McEwen not use the roller brush to get a perfectly neutral layer of painting, but he painted directly on the canvas with his hands, obtaining a very peculiar kind of texture which has nothing to do with Jean-Paul Riopelle's textural use of the painting knife, or with the heavy impastos of Borduas's last period, the Black and White works that he painted in Paris. In the case of McEwen, the tool is more than an extension of the hand - it is the hand itself! Moreover, the colour in McEwen is never free of its emotional content - it is never just a way to denote different areas in the painting. On the contrary, as in Verticale nocturne, the black stripes on each side and in the middle are vibrating with some blue to justify the word "nocturne" in the title, and the red vertical planes are like a thin veil showing both blue and black in its small openings. We do circulate to a certain depth in this painting, but this va-et-vient (to-and-fro) happens in a rather narrow space, where background and surface are not very far apart.

(*) Value is calculated as an average of the top oil painting sale records from ArtValue.ca database.
This information is not intended to substitute professional advice.
To estimate the value of a specific artwork created by Jean Albert McEwen, follow some of the advice from our Valuating art page, or contact an art specialist if our automated estimate value is greater than C$2,500.