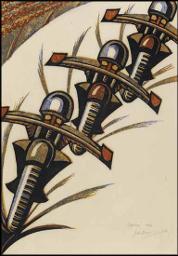 Born in Bury St. Edmunds, England, Sybil Andrews produced drawings, watercolours, monoprints and oil paintings, but it is her linocuts for which she is most famous, and she attained international acclaim for them. Speedway is considered one of her finest linocuts. During World War I, Andrews worked making airplane parts in Coventry, and after the war she returned to Bury St. Edmunds, where she met architect Cyril Power. In 1922, at the age of 24, Andrews left Bury St. Edmunds with Power (who was almost 50) to study art at the Heatherley School of Fine Art in London. Three years later Power and Andrews were appointed by Ian Macnab to staff his newly established Grosvenor School of Modern Art, with Andrews becoming the school secretary. In 1926 while at the Grosvenor School, Andrews and Power met Claude Flight, who taught them how to cut and print from linoleum blocks (a new art form at the time). Andrews commented in a 1982 newspaper article: "There was no accepted way of treating the block, so we were all experimenting. We didn't know what effects would be achieved until we had actually printed them. As you can imagine, many of the blocks ended up in the wastebasket." From 1930 to July 1938, Andrews and Power shared a small studio at 2 Brook Green in Hammersmith, London, and developed a common aesthetic in their work. This informal working partnership produced an extraordinary body of work - some of the finest prints of the 1930s. It was a period of widespread change, when new materials such as linoleum emerged, a period when art, industrial design, architecture and fashion design were transformed. Andrews's themes were of the dynamism of the modern machine age and the movement of the human figure at work or sport, usually executed using only four linoleum blocks. In total, Andrews produced an incredibly consistent body of 76 linocuts, of which 43 were made from 1929 to 1939 - considered her best period - when she shared the studio with Power. Andrews's linocuts are acclaimed to have surpassed those of her teacher Flight, and in fact many consider Andrews to be the most gifted of the Grosvenor School artists. In 1938, Andrews and Power gave up their studio at Brook Green. During World War II, Andrews worked in the British Power Boat Company shipyard at Southampton, where she met her future husband, Walter Morgan. After the war Andrews and Morgan immigrated to Canada, settling in Campbell River, which at that time was a remote logging town on Vancouver Island. In 1951 Andrews built a simple studio and resumed her printmaking; she also taught art and music classes. Speedway is Andrews's most important and highly sought-after linocut. Its importance is reflected in the fact that this work was chosen for the front cover from all the works of the seven Grosvenor School artists profiled in Stephen Coppel's catalogue raisonné Linocuts of the Machine Age. Speedway was created when Andrews was still in London and working in the Brook Green studio. Coppel writes, "This image of motor-bike trials was originally conceived as a poster commission for the London Passenger Transport Board in the 1930s, although no poster was ever made." This print is the embodiment of the dynamism of machine-age speed that fascinated the modern world. A copy of Speedway is in the collection of the Museum of Modern Art, New York, and was a highlight in the Museum of Fine Arts, Boston, exhibition Rhythms of Modern Life: British Prints 1914 - 1939 that toured to the Metropolitan Museum of Art, New York, in 2008. This is a very fine impression on cream fibrous oriental laid paper.

(*) Value is calculated as an average of the top linocut sale records from ArtValue.ca database.
This information is not intended to substitute professional advice.
To estimate the value of a specific artwork created by Sybil Andrews, follow some of the advice from our Valuating art page, or contact an art specialist if our automated estimate value is greater than C$2,500.