Robert Wakeham Pilot's work could be available for sale at public auction with prices in the range of C$10,000 - C$500,000, or even much higher. 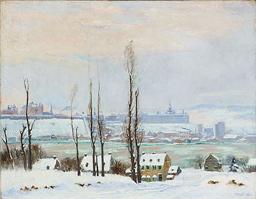 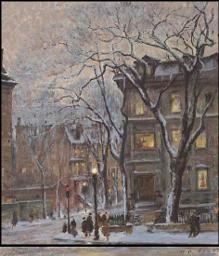 Well-known art dealer Blair Laing wrote, "Robert Pilot was, at his best, one of Canada's finest artists. His early works of lower-town Quebec City and streetscapes of Montreal catch the piquant Gallic charm of these places and are a delight to look at." Pilot spent his youth in the vibrant studio of his stepfather Maurice Cullen, who had married Pilot's widowed mother in 1910. Cullen was one of Canada's finest Impressionist painters, and quite successful during his lifetime. He had been trained in European methods and welcomed his young stepson into his studio, giving him solid foundational skills in painting through the apprenticeship method, which was in its waning days as a common educational practice. Along with the direction of William Brymner at the Royal Canadian Academy, this training gave Pilot a sound academic foundation and excellent technical skills. In addition to serving in World War I (and later World War II), Pilot followed the example of his stepfather and other artists of the time and traveled, training further at the Académie Julian in Paris and sharing his studio there with Edwin Holgate. In 1922, Pilot returned to Canada and opened a studio in Montreal. He turned immediately to painting Canadian scenes, selecting views in the nearby parks, along city streets, near Montreal's beautiful churches and along the edges of the city. While the influence of his time in France remained strong throughout his life, Pilot was able to blend the Canadian scenery and his French training smoothly. Here, in this fine scene painted at the intersection of Sherbrooke and Peel Streets in Montreal, the soft evening light and frosty winter atmosphere are of paramount interest in the painting. Pilot was especially fond of early evening light and often painted scenes such as this, wherein daylight is just ending and the transition into evening begins. This fleeting moment of ethereal light and atmospheric effects would fascinate him and stand as one of his favourite subjects. Pilot was also particularly adept at depicting snow, and here we see it in the form of frost, slush and ice. Further, light is expertly handled in differing ways in this work; we have the warm light coming from the windows in the buildings, the cool light coming from the street lamps and their soft reflections on the wet, slick street, and the fading evening light in the sky, which Pilot has painted using a subtle pointillist method. Larger daubs of colour demark the sky from the tips of the tree branches, which are coated with hoar frost and differ only slightly in their form and colour from the sky. The lyrical, calligraphic forms of the trees further serve to break up the linear patterns of the architectural details on the buildings directly behind them and play nicely with the vertical spikes of the iron fence, creating both balance and contrast in this unified and tonally subdued work. Corner of Sherbrooke and Peel Streets has an inviting, pleasant appeal, despite the fact that we are looking at a cold, wintry evening. Warm interior lights tell us the rooms are occupied, the deftly painted figures attend to the business of heading on their way, and the red and green traffic lights indicate that everything is under control. Pilot's depictions of Quebec have the ability to take us back in time without being trite or overly sentimental. His foundational skills as a colourist and compositional master did not allow for trivial or hackneyed scenes, and his affection for his home province, its people and scenery, infused his work with a palpable sincerity. As the last significant painter in the Canadian Impressionist style, his works are highly sought after, and Corner of Sherbrooke and Peel Streets is a fine example - an evocative, everyday moment in an historic city during the long Canadian winter.

(*) Value is calculated as an average of the top oil painting sale records from ArtValue.ca database.
This information is not intended to substitute professional advice.
To estimate the value of a specific artwork created by Robert Wakeham Pilot, follow some of the advice from our Valuating art page, or contact an art specialist if our automated estimate value is greater than C$2,500.