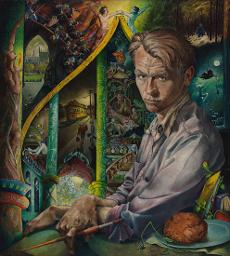 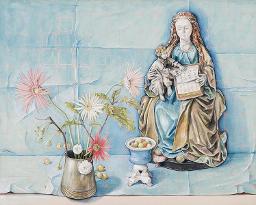 This work has been consigned from the family of Father Thomas Lynch, who played an important role in the life and art of William Kurelek. The two met in 1956 after Kurelek had spent several years in and out of psychiatric hospitals in London and was unsatisfied with his progress. While Kurelek had been an atheist since university, following an existential crisis which was prompted by his mental illness, he began to reconsider the existence of God and by 1954 he started to pray. Kurelek recalls their meeting as follows, “as if things were working out according to a hidden plan, I met Father Lynch. I was then settled in the southern part of London, called Stratham Hill…I used to stop in at St. Simon and St. Jude, the local Catholic Church on most days to pray. Fr. Lynch was the parish priest, and after a while he noticed me as a newcomer…So the next thing I knew, we were sitting in the armchairs by the fire, and he was finding out that I was a painter and was asking my opinion of the pictures on his wall. His hobby, it was evident, was the collection of curios. He was Irish and was stout in appearance and balding, with the remains of his hair pure white…I found him very easy to get along with, so much so, that in a short time, we were pulling one another’s leg. And, he was very generous, almost too much so, with gifts and favors…Where he himself could not answer my philosophical doubts, he humbly and conscientiously proceeded to put me in touch with those who could or else hunted up the appropriate book. It seemed my prayer had been answered; this man certainly did not make me feel small and dull, and he really wanted to help me.”

(*) Value is calculated as an average of the top oil painting sale records from ArtValue.ca database.
This information is not intended to substitute professional advice.
To estimate the value of a specific artwork created by William Kurelek, follow some of the advice from our Valuating art page, or contact an art specialist if our automated estimate value is greater than C$2,500.