Sir Frederick Grant Banting's work could be available for sale at public auction with prices in the range of C$5,000 - C$500,000, or even much higher. 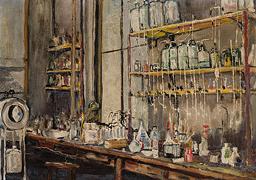 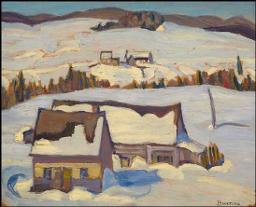 Sir Frederick Banting was a brilliant doctor, research scientist and an artist. Banting and his associate John Macleod were awarded the Nobel Prize in Medicine in 1923 for the discovery of insulin for the treatment of diabetes. Banting's interest in art began after World War I when he was struggling to establish his practice in London, Ontario. After meeting A.Y. Jackson and buying one of his sketches, his keen interest in the art world resulted in friendship with Jackson. Beginning in 1927, Jackson and Banting went on sketching trips together to Quebec villages, Great Slave Lake, the Arctic and Georgian Bay. After their trip to Georgian Bay, Jackson wrote: "Banting was developing into a vigorous painter.most of his work was painted on small birch panels, out-of-doors, under all kinds of weather conditions. He was learning to simplify and to keep his colours fresh." Banting was particularly fond of the Quebec villages, stating in his diary: "I hate to leave this country. There are so many fine things about the people. They have simple faith, large families, little of this world's goods and much happiness." Jackson wrote that the last trip they took together was to St. Tite des Caps, a little village on the Cap Tourmente Plateau, the subject of this beautiful and rare painting. Banting told Jackson that when he was fifty he would leave research and take up painting full-time, but tragically, he died in an air crash on his way to the UK with the Medical Corps in World War II.

(*) Value is calculated as an average of the top oil painting sale records from ArtValue.ca database.
This information is not intended to substitute professional advice.
To estimate the value of a specific artwork created by Sir Frederick Grant Banting, follow some of the advice from our Valuating art page, or contact an art specialist if our automated estimate value is greater than C$2,500.