Armand Tatossian's work could be available for sale at public auction with prices in the range of C$2,500 - C$10,000, or even much higher. 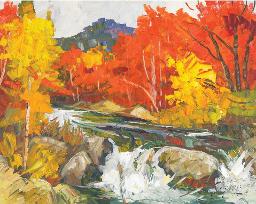 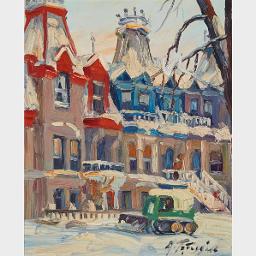 Born in Alexandria, Egypt to parents of Armenian descent, Armand Tatossian seemed destined to excel at art: He was, afterall, named after his grandfather, who was the Curator at the Alexandria Art Gallery. His success as an artist was solidified when, in 1973, he was elected as the youngest member to date of the Royal Canadian Academy. His works highlight the vibrancy of the Montreal streets, playing upon their spontaneity. It is easy to understand why Tatossian was inspired by his Montreal surrounds – as he lived for a time in the same neighbourhood as Adam Sherriff-Scott (to whom he was an assistant), Goodridge Roberts, Jack Beder, Stanley Cosgrove, and A.Y. Jackson. Tatossian studied the city, offering shifting perspectives, traversing its grounds in unexpected ways – from the ledge of a window sill, to an obtuse angle au coin de la rue.

(*) Value is calculated as an average of the top oil painting sale records from ArtValue.ca database.
This information is not intended to substitute professional advice.
To estimate the value of a specific artwork created by Armand Tatossian, follow some of the advice from our Valuating art page, or contact an art specialist if our automated estimate value is greater than C$2,500.