Henri Leopold Masson's work could be available for sale at public auction with prices in the range of C$2,500 - C$25,000, or even much higher. 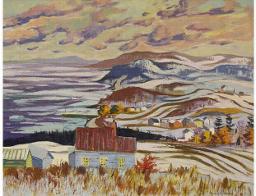 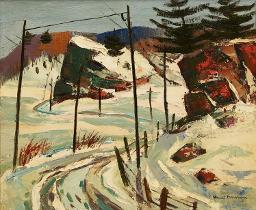 Henri Leopold Masson, Canadian, (OSA, CGP, GSPWC)was born in Namur, Belgium in 1907. He came to Canada with his family in 1921 and settled in Ottawa. He was employed as a silver engraver for several years as a young man and became a master engraver at the age of 25. Visiting the National Gallery of Canada around this time he discovered the work of the Group of Seven. Inspired by their style and use of colour he was inspired to try painting himself. He studied for a time at the Ottawa Art Association, but was mainly self taught. Two years later, in 1934, he was already emerging as a painter of importance. By 1945 he could devote most of his time to painting and exhibited extensively with good success. He painted genre scenes in the Hull area and landscape in the Gatineau Valley. He also painted on trips to Europe and the United States. He exhibited at the Robertson Galleries and Wallack Galleries in the 1960's and 70's. A significant collection of his work is housed in the National Gallery of Canada. He died in 1996.

(*) Value is calculated as an average of the top art sale records from ArtValue.ca database.
This information is not intended to substitute professional advice.
To estimate the value of a specific artwork created by Henri Leopold Masson, follow some of the advice from our Valuating art page, or contact an art specialist if our automated estimate value is greater than C$2,500.