Berthe Des Clayes's work could be available for sale at public auction with prices in the range of C$5,000 - C$25,000, or even much higher. 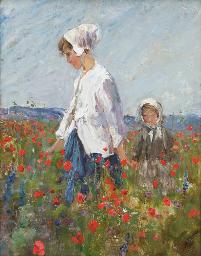 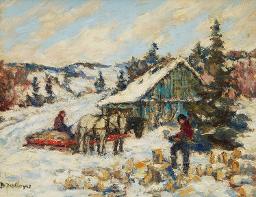 Winter in the Laurentians
oil on board

Born in Aberdeen, Scotland, in 1877, Berthe Des Clayes studied at the Bushey School of Art in England. She later attended the Academie Julian, in Paris. She returned to Britain and lived for a short time in London before moving to Canada with her sister, Gertrude, in 1912. Their younger sister, Alice, also an artist, joined them two years later. They settled in Montreal, setting up a studio in Beaver Hall Square, a favourite haunt for artists and architects. Berthe travelled around England and France after the First World War. Throughout her life, she divided her time between England and Montreal and died in Devon, England in 1968.

(*) Value is calculated as an average of the top painting sale records from ArtValue.ca database.
This information is not intended to substitute professional advice.
To estimate the value of a specific artwork created by Berthe Des Clayes, follow some of the advice from our Valuating art page, or contact an art specialist if our automated estimate value is greater than C$2,500.