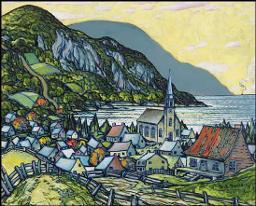 Saint-Siméon is a small village on the St. Lawrence River in the Charlevoix region, some 175 kilometres from Quebec City. Marc-Aurèle Fortin's painting showing the village in the foreground, in front of the spectacular series of capes ending in the river, is a classic view of the site. Fortin was committed to the idea of producing an image of Quebec that had nothing to do with Europe, and in that he shared the thoughts of the American regionalists (Thomas Hart Benton, John Steuart Curry and Grant Wood) and even of the Group of Seven, who were similarly inclined. But he was also convinced that neither the bustling US economic growth nor the wild Canada cherished by the Group could be used to accurately represent the situation in Quebec. For 300 years, French settlers had established churches and villages in Quebec, pushed back the wild border of the forest and established a rural countryside similar to the one the first colonists had left in France. The average look of the landscape did not have much to do with the Group's depiction of Algoma in Northern Ontario or the Rockies in the West. Fortin thought, along with traditionalist thinkers like Roman Catholic priest and historian Chanoine Lionel Groulx, that Quebec remained unique because of the language barriers and the attachment to the Catholic faith, both of which allowed it to avoid the secularisation of its way of life. In this, Fortin was in accord with a part of Quebec's elite - in particular the clergy. Some critics (like Jean Chauvin, Maurice Gagnon and Paul Gladu, to name but a few) who admired Fortin's painting but did not share his traditionalist views, tried to annex him to the "modern art" movement - the so-called "art vivant" trend. However, he objected vehemently to it because of his attachment to the great masters of the past (he quoted Rembrandt, Peter Paul Rubens and Nicolas Poussin in his work), and he kept his vision of a rural Quebec - immutable, far from the city and its global economy. His trip to the north shore of the St. Lawrence River immersed him more deeply in this persuasion, already defined in his paintings of large trees done on the outskirts of Montreal.

(*) Value is calculated as an average of the top oil painting sale records from ArtValue.ca database.
This information is not intended to substitute professional advice.
To estimate the value of a specific artwork created by Marc-Aurèle Fortin, follow some of the advice from our Valuating art page, or contact an art specialist if our automated estimate value is greater than C$2,500.