Herbert Sidney Palmer's work could be available for sale at public auction with prices in the range of C$1,000 - C$10,000, or even much higher. 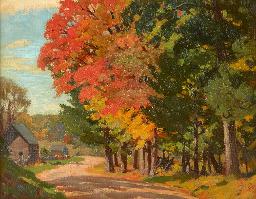 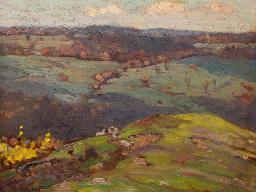 Herbert Sidney Palmer was born in Toronto on June 15th, 1881. His artistic training began under the with of J.W. Beatty and F.S. Challener at the Ontario College of Art. His first public exhibition was with the Ontario Society of Artists in 1905, to which he was elected a member in 1909, and with which he had a long association, serving as Secretary for over 40 years. He was also elected an associate of the Royal Canadian Academy of Arts in 1915. Over his long career, Palmer became known as a superb landscape artist, known for his handling of colour. Locales for his paintings include the Humber Valley area around Toronto, the Muskokas, Quebec and Haliburton. He often painted in a pastoral manner, depicting sheep and cows at pasture. His work can but found in numerous private collections, as well as the permanent collections of the Art Gallery of Ontario, the National Gallery of Canada and many others.

(*) Value is calculated as an average of the top oil painting sale records from ArtValue.ca database.
This information is not intended to substitute professional advice.
To estimate the value of a specific artwork created by Herbert Sidney Palmer, follow some of the advice from our Valuating art page, or contact an art specialist if our automated estimate value is greater than C$2,500.