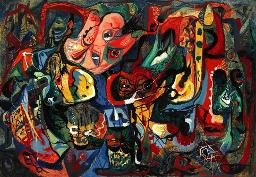 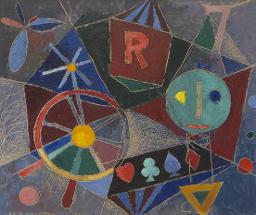 In March 1946, at the Maison des Compagnons in Outremont, Léon Bellefleur held his first exhibition, which also included artwork by his children. Bellefleur was fascinated by the surrealist worlds of Miró, Klee, and Breton, the abstractions of Kandinsky, and the onirism of Alfred Pellan, an artist whose company he keenly sought. In 1947, he wrote Plaidoyer pour l'Enfant (Plea for the Child), "which constituted his pedagogical and aesthetic manifesto as well as his moral and spiritual one," as explains Guy Robert (translation ours). The following year, he added his name to the Prisme d'yeux manifesto, written by Jacques de Tonnancour and signed by fourteen artists, in favour of a "living art" that stood against both academia and the radical ideology of the Automatistes. Working among young people, Bellefleur the instructor drew heavily, as Bellefleur the artist had, on the fresh energy that surrounded him: "True maturity, he wrote in Plaidoyer pour l'Enfant, is found in those who have preserved the gifts of childhood, developed them, and left behind all that is not in tune with his nature" (translation ours). Sans titre was painted during this inspiring period, full of decisive encounters, discoveries, and material play, such as the famous exquisite corpse that he carried out together with his friends Mimi Parent, Jean Benoit, Albert Dumouchel, and, later, Roland Giguère. This oil painting forms part of the same aesthetic lineage as Poisson dans la ville (1946), which is part of the National Gallery of Canada collection, and Hallucination (1946), also called Tentation, an important painting first purchased by François Hertel.1

(*) Value is calculated as an average of the top oil painting sale records from ArtValue.ca database.
This information is not intended to substitute professional advice.
To estimate the value of a specific artwork created by Léon Bellefleur, follow some of the advice from our Valuating art page, or contact an art specialist if our automated estimate value is greater than C$2,500.