Nicholas (Nickola) de Grandmaison's work could be available for sale at public auction with prices in the range of C$25,000 - C$50,000, or even much higher. 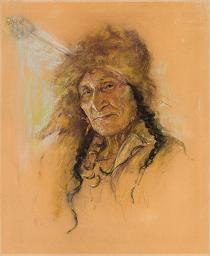 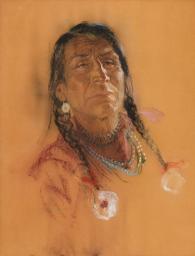 Nicholas de Grandmaison was born in Russia to an aristocratic family and spent his early life as an army officer. In 1919 he attended a Russian officers' training camp in England, but a short time later, revolution in Russia closed the door to his returning to his homeland. Instead, he went to art school in London, and in 1923, immigrated to Canada, settling in the Prairies. Portraiture was his chosen genre, facilitated by his charming, engaging personality. In 1930, during a pivotal trip to The Pas in northern Manitoba, he became fascinated with First Nations peoples. He saw them in a romantic light as independent and proud, and attained renown for his depictions of members of First Nations tribes such as the Peigan, Blackfoot and Blood. De Grandmaison passionately declared, "I love them as fellow brothers. They have character, color and history in their blood...These are my children, and I wish to preserve their faces for posterity. I shall paint them until I die." De Grandmaison was a master of the pastel medium, as seen in this particularly fine portrait, which embodies the noble character that he sought in his subjects.

(*) Value is calculated as an average of the top pastel sale records from ArtValue.ca database.
This information is not intended to substitute professional advice.
To estimate the value of a specific artwork created by Nicholas (Nickola) de Grandmaison, follow some of the advice from our Valuating art page, or contact an art specialist if our automated estimate value is greater than C$2,500.