Bruno Joseph Bobak's work could be available for sale at public auction with prices in the range of C$2,500 - C$25,000, or even much higher. 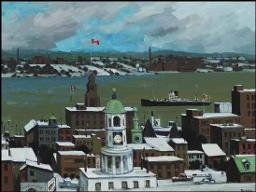 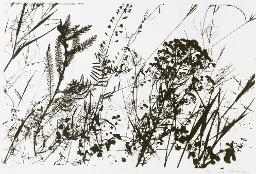 Bruno Bobak was born in 1923 in Wawelowka, Poland, but grew up in Canada after immigrating to Saskatchewan with his family in 1924. In 1936, he went to Ontario and took classes at the Art Gallery of Toronto with Arthur Lismer (1937-1939) and at Central Technical School with Carl Schaefer, Robert Ross, and Elizabeth Wyn Wood (1939-1942). Bobak then promptly enlisted in the army and was appointed as an official war artist - and the youngest one - in 1944. Bobak's service as a war artist gave him the opportunity to commit himself to painting as a career: "By having to work every day, one was obliged to paint. There was no way you could not paint, that was what you were paid to do." Bobak married fellow war artist Mollly Lamb in 1945. They moved to Vancouver when Bobak was appointed head of the Design Department at the Vancouver School of Art (1948-1956). In 1957, he was awarded a Canadian Government Overseas Senior Fellowship and studied in London at the City and Guilds of London Art School. In 1959, Bobak became artist-in-residence at the University of New Brunswick, and in 1962 became director of the University of New Brunswick Art Centre, a position he held until his retirement in 1987. Bobak's work is diverse in style (ranging from realism to expressionism), in media (drawing, watercolour, oils, murals, batik textiles, sculpture), and in subject (landscape, still life, figure, urban scenes, architecture). His work has been exhibited extensively across Canada and in Europe. Of particular note is Bobak's major touring exhibition,'Humanism', which was shown throughout the Atlantic region in 1971.In 1996, Bobak received the Order of Canada. In 2006 the book Bruno Bobak: The Full Palette, featuring Bobak's work alongside essays from five authors about his life, was published by the Beaverbrook Art Gallery, and in 2007, Bobak held a solo exhibition at Fredericton's Gallery 78. Bruno Bobak died in Fredericton, New Brunswick on September 24th, 2012 at the age of eighty-eight.

(*) Value is calculated as an average of the top oil painting sale records from ArtValue.ca database.
This information is not intended to substitute professional advice.
To estimate the value of a specific artwork created by Bruno Joseph Bobak, follow some of the advice from our Valuating art page, or contact an art specialist if our automated estimate value is greater than C$2,500.