Arthur Shilling's work could be available for sale at public auction with prices in the range of C$2,500 - C$25,000, or even much higher. 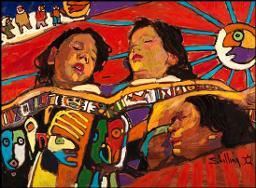 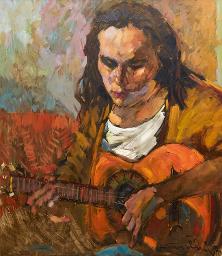 The work of painter and draughtsman Arthur Shilling is distinguished for flowering during the resurgence of First Nations artistic activity in the 1960s, yet employing none of the newly-flourishing styles. Instead, Shilling melded European influences into a unique expression of his Ojibwa worldview which would become increasingly important after he reached a personal turning point in 1980. Shilling was a natural colourist and continual experimenter, whose representational works - often portraits - were rendered with a vivid characteristic palette and later in formats which would transcend European conventions (i.e. multiple figures, totem formats). Shilling attended the New School of Art and the Ontario College of Art and in 1967, was presented with the Canadian Centennial Medal.

(*) Value is calculated as an average of the top oil painting sale records from ArtValue.ca database.
This information is not intended to substitute professional advice.
To estimate the value of a specific artwork created by Arthur Shilling, follow some of the advice from our Valuating art page, or contact an art specialist if our automated estimate value is greater than C$2,500.