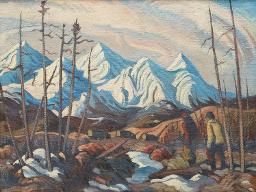 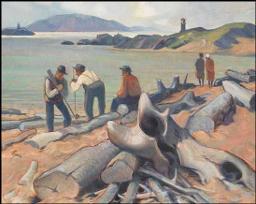 Henry Glyde came to Canada from England in 1935, taking a teaching position at the Provincial Institute of Technology and Art in Calgary. He was head of the painting program at the Banff School of Fine Arts from 1936 until his retirement, and also taught at the University of Alberta, establishing their art department in 1947. Glyde's works are often concerned with social realism, and even in this pastoral scene at Gowland Point, a regional park on Pender Island, British Columbia, Glyde's subtle social comments are apparent. The fisherman, working class, talks with another man who leans on an oar, their heads bent in considered conversation, while the third man, seated, looks on. Glyde excelled at depicting people caught in conversation, and the downward gaze of the man with the oar and the posture of the fisherman are delightful. Two women, apart from the men and perhaps on holiday, gaze out toward the water, the white-hatted lady inclining her head towards her companion who, in turn, leans back slightly. It is a lovely, gentle scene, and Glyde's soft hazy palette of muted tones evokes a feeling of sultry coastal weather.

(*) Value is calculated as an average of the top oil painting sale records from ArtValue.ca database.
This information is not intended to substitute professional advice.
To estimate the value of a specific artwork created by Henry George Glyde, follow some of the advice from our Valuating art page, or contact an art specialist if our automated estimate value is greater than C$2,500.