Benjamin Chee Chee's work could be available for sale at public auction with prices in the range of C$10,000 - C$25,000, or even much higher. 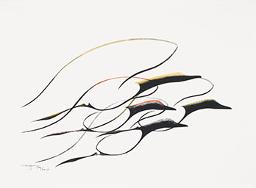 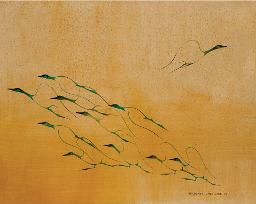 Benjamin Chee Chee (1944-1977) struggled with his identity his entire life. Born in Temagami, he grew up without his parents and despite identifying as Ojibwe, Chee Chee had a fraught relationship with his relatives and culture. After moving to Montreal in 1965, Chee Chee was encouraged to develop his passion for art, and it is through this creative practice that he was able to regain, if even for a few years, what Al Evans calls a "promise of identity". Part of the second generation of Woodland School painters, founded famously by Norval Morrisseau in the early 1960s, Chee Chee's style was largely influenced by modern abstraction, setting him apart from his contemporaries. After moving to Ottawa and over the span of three years from 1973 to 1976, his style transformed from colourful, abstract and geometric shapes to one of linear, simplistic and figurative representations of birds and animals. Not wanting to be categorized as an "Indian artist", Evans notes he thought of himself as an "Ojibway artist-a member of the Ojibway nation" with an aesthetic that was completely his own, denouncing the mythical and legend-based narrative of other Woodland artists. Speaking to this, he stated "my drawings of animals and birds have no symbolic meaning from the past. To me they are creatures of the present and I draw them because I like their clean lines and beautiful shapes". This subdued but elegant form is evident in Chee Chee's 1974 painting Flock of Geese. The fine lines which animate the painting capture the experience of watching the Canada geese fly in and out of the north as the seasons change. Chee Chee's birds are the paintings that made him popular and for which he is most remembered.

(*) Value is calculated as an average of the top acrylic painting sale records from ArtValue.ca database.
This information is not intended to substitute professional advice.
To estimate the value of a specific artwork created by Benjamin Chee Chee, follow some of the advice from our Valuating art page, or contact an art specialist if our automated estimate value is greater than C$2,500.